Stories of Home and Hope 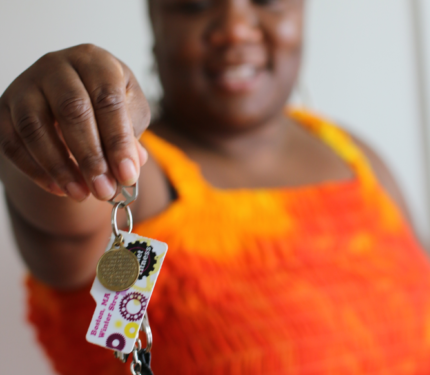 Stories of Home and Hope

Just like all of us, people experiencing homelessness want two fundamental things in life: a safe place to live and hope for a better future.

Friends of Boston’s Homeless knows that our surroundings shape our thoughts, emotions, and actions. A place of one’s own that is peaceful, safe, and dignified can transform lives.

We do more than help people experiencing homelessness move into safe, stable housing — we give opportunity, independence, dignity, and hope.

Meet some of the people we have helped.

Kimberly had a nice job and a nice home. But when the company she worked for went under, she lost her savings, her insurance, her car, her peace of mind, and eventually her home. A history of trauma she thought she’d long since put behind her came flooding back. She suffered a breakdown and ended up at Long Island Shelter. Our Housing Start-up Fund got her out of shelter and into a new apartment just before the new year 2014, connected with supportive services, and helped make her new place a safe, serene home. Today, Kim is happy, healthy, going back to school and starting a new career. Her story is an important reminder of how easy it is for any of us to fall on hard times and how vital a home of one’s own is to rebuilding one’s life. “I’m blessed to be here now in this apartment. It seems to have all come together very nicely in my new place.”

Damion, a Veteran, spiraled into deep depression when his wife suddenly passed away. Unable to attend to even his most basic needs, he lost his job, his car, his home, and eventually ended up sleeping outside and in shelters. Struggling and embarrassed by his situation, Damion says he never would have asked for help. But with the help of Boston’s Housing First Initiative and Friends’ Housing Start-up Fund he was finally able to get the help he needed. With that help, today Damion has a safe, dignified home, a job he loves, and is finally feeling like himself again. “[Housing First] makes sure I maintain my mental health and my work/life balance. It’s so much more than just housing.”

At 71 years old Michael had been homeless for 14 years. He suffered from chronic pain after falling from a ladder while working as an electrician. He became depressed and began abusing alcohol.
After his wife left him, Michael began sleeping on the streets. He was a frequent user of the Boston Medical Center emergency room and often got arrested for disorderly conduct. Michael was one of the first people identified for the HUES (High Users of Emergency Services) to HUES to Home (high utilizers of emergency services) Housing First Program and was quickly placed in housing. Once in his own home, he began to focus on his mental health and health issues. He also began substance abuse counseling. Michael’s been in his own place since 2012. He’s had no emergency room visits or arrests since moving into his apartment. But what he does have is peace of mind, friends and community, and hope for the future.

Luis was homeless for 15 years, sleeping in tents and abandoned buildings, before being housed at our Yetman Community House. Once in safe, dignified housing, he was able to regain his sobriety, reunite with his children, obtain his welding certification from Wentworth and get a great job. He also volunteers at the shelter, where he’s a beacon of hope for others struggling with homelessness, helping them get back on their feet too. “There are no words to thank you enough. I couldn’t be the person I am today. I’m a good father, I’m a good brother, I’m a good son because of the help I’ve gotten.”

By 33, Chasity had already spent five years living on the streets. Suffering from a severe trauma and a paranoid disorder, she was afraid to come in to the shelters and primarily used the emergency room for respite when the weather got too cold. Despite all this, Chasity always envisioned her own home. Through Housing First, she got that home she always dreamed about and finally found the serenity and stability she needed to address her mental health and substance abuse issues. Today, Chasity not only takes care of herself, but also helps others by leading support groups in the community. With her newfound confidence and independence, she started her own non-profit. And just as she dreamed, Chasity loves to decorate her home. “My apartment has given me the stability I’ve needed for years. This gives me great joy.”

Paul has has been in his own apartment for over six years now, after six years on the streets. And what a difference it’s made in his life! Prior to housing, Paul was struggling with drug abuse and grieving the deaths of  both of his parents in a short period of time, all while being homeless. With the help of his caseworker he’s remained sober and for the first time in years, he’s hopeful. He says the stability of a constant safe place to live has allowed him to focus, work through his grief, and participate in relapse prevention and group therapy that he previously had not been able to due to the daily stress of living on the streets. But above all Paul says “I’ve become ‘lighter’ in mind and body now that I finally have a stable place to live”, and he’s stopped carrying around his backpack.

Arley is a beautiful example of the power of home to transform lives. He was homeless for nearly eight years, sleeping mostly in Boston Common. Arley was housed on October 29, 2014 (three weeks after Boston’s Long Island Bridge closed). Today, he’s reunited with his children and working on a degree at UMASS. Once he completes his studies, he’ll help others gain their independence too. “I couldn’t ask for anything better, considering I was in a homeless situation for over 7 years. Now I have my children over and can be the father I want to be. And I’m a student now, so I spend a lot of my time studying. I’m just so grateful to have a place to come to.”

Sarah had a good job in administration at MIT for decades, but drinking finally got the best of her. She lost her job, her health insurance, and her apartment. But she never lost her dignity. At 70 years old and only 4 1/2 feet tall, she was vulnerable on the streets and eventually came to Woods Mullen Shelter for help. The Housing First staff worked with her to get her safely housed, re-connect her with health care providers, and get her treatment for her substance abuse. While there, Sarah also began helping others in need of companionship and a smile. Today, Sarah is safe and sober in a cozy furnished apartment close to her doctors and counselors. Sarah’s favorite saying is “no matter what, I will always have my dignity because that’s what I was born with.” Now, Sarah helps restore this sense of dignity in other women by volunteering at Rosie’s Place.

Struggling with addiction, Ronnie spent 10 years homeless, the last year in a tent. Hypothermia nearly killed him. Last year, for the first time in his life, he had his mother to his house and made her Thanksgiving dinner. He’s reunited with his daughter he hadn’t seen in 15 years too and loves spending time with his family. He also rescued a kitten and a rabbit from the local shelter and enjoys walking in the park near his new apartment.

Trisha is a Veteran. Her husband beat her up so badly he broke her back. She was prescribed pain medication and became addicted. Trisha spent years on the streets and in and out of emergency rooms before being safely housed at our beautiful Valentine Women’s Supportive Housing Program. Once in safe, dignified housing, she was able to regain her sobriety, reunite with her children, and finally live the peaceful, healthy, hopeful life we all want to live.

Ron lived on the streets and in shelters for over fifteen years prior to being housed by Housing First. For decades, Ron suffered from an undiagnosed Bipolar Disorder and couldn’t keep a job. With no health insurance, he self-medicated and used the emergency room for all his health care needs. Ron has been in his own apartment since March 2012, currently in senior housing where he enjoys the support and company of people his age. He takes his psychiatric medication daily, participates in a men’s health and recovery program, and attends regular AA meetings. Ron has also became an active member of his local community and is reunited with his family.

These stories, and the hundreds more like them, are a true testament to the power of Housing People First – how our surroundings shape our thoughts, emotions, and actions. And, how a place of one’s own that’s peaceful, safe, and dignified can transform lives.

Please make a donation to the Housing Start Up Fund or visit our Housewarming Registry where you have the opportunity to offer essential household items and turn someone’s empty new apartment into a warm, welcoming home . Your support transforms lives!